For the first time last night we visited Marble Slab Creamery in Lagoona Mall. It’s a very similar concept to Cold Stone’s but in my opinion with less variety.

Our visit was tainted firstly by unattentive staff who despite us being their only customers continuously miss understood the phrase “what’s in it” as “I would like one of those please”. Every time we asked what was in an ice cream, they would answer “Yes sir” and start preparing it. It’s like they couldn’t wait to get rid of us. 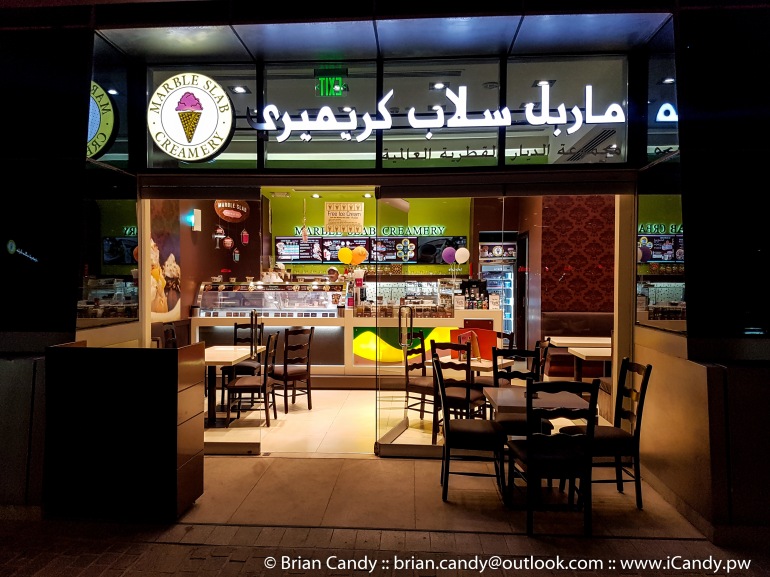 I was the last to order, and I decided to go for a creation which I can’t remember the name of, but basically it was a chocolate based flavour. And I was told I couldn’t have it because they had run out of chocolate ice cream. What!? They then proceeded to try and get me to replace the chocolate ice cream with Red Velvet because it tastes like chocolate. I tasted the Red Velvet and no it did not taste enough like chocolate for me to be duped into accepting it. I stared at the menu for a long time trying to select something else I fancied instead, but everything I liked the look of used chocolate ice cream as an ingredient.

In the end I decided to just leave it, and go and help Victoria eat her Strawberry Skydive instead. But as I was leaving I asked the staff “How can an ice cream shop run out of chocolate ice cream? It’s like Mc Donald’s running out of burgers”. The reply I got was unexpected. A member of staff replied with “Yes sir, it’s because we are trying to promote other flavours”. And that prompted my second WHAT!?

Brian and Victoria very much enjoyed their flavours, but complained that Cold Stone’s were bigger and they could have done with a bit more. So I was the only one that had a bad experience. And that was based on staff that seemed disinterested in doing their job, and a management failure to monitor stock levels of chocolate ice cream.

Would I go back? Naaaa! After leaving Marble Slab we went to cioccolat italiani next door. They had lots of chocolate ice cream, and that’s where I will go next time I am in Lagoona Mall and fancy an ice cream.

Not a Spam Sandwich but almost as good

QA to ship medical supplies to India free of charge